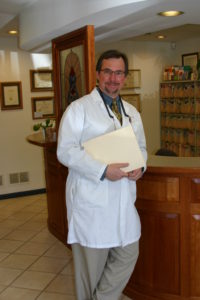 In 1986 Dr. Wilson established his private practice in Old Saybrook, CT. In the over 30 years since, he has developed a practice “Committed to Excellence”.

Dr. Wilson graduated from Miami University with a Bachelor’s Degree in Chemistry.  He then earned his Doctorate of Dental Surgery at The Ohio State University College of Dentistry.  Following dental school, he completed a Yale University affiliated general practice residency at Danbury Hospital in Danbury, Connecticut. There he received advanced training in periodontics, endodontics, oral surgery, orthodontics, and pedodontics. Since his residency, he has completed implant prosthetic training with the Branemark, 3i, Keystone, and Zimmer Implant Systems.

Dr. Wilson has received the prestigious Fellow of the Academy of General Dentistry Award. This achievement signifies a commitment to continued education and excellence. In addition, Dr. Wilson was selected as an honored member of Who’s Who Among Outstanding Americans. In 2003, in it’s first publication and each year since, Dr. Wilson has been named one of America’s Top Dentists by the Consumer’s Research Council of America.

Recently, Dr. Wilson achieved Fellowship status in implant surgery awarded by the International Dental Implant Association, the largest implant organization in the world.  In 2017,  he performed over 30 hours of implant surgery over 3 days in the Dominican Republic.

Dr. Wilson is married to Shelley and they have three children: Lindsey, Andrew and Tyler.